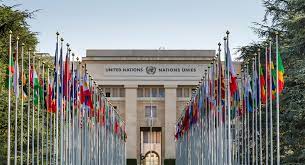 America has used sanction diplomacy against all adversaries ever since World War II.

The USAID and it’s subsidiary USCIRF have been used by the American State department against many non combating adversaries mostly permanently non-permanent allies. Except Canada, UK and Australia, there are no permanent American allies. Most ICJ and UN resolutions are non binding on the US. Currently USCIRF and the State Department are being cleverly manipulated by Islamic nations to pass warning shots to Indians, especially Hindus in the USA as well as in India. The designers of the American economic system were clever enough to build a financial ecosystem that fueled other nations’ money into the American economy. For that ecosystem the predominance of the US dollar, backed by the US military power, was primordially important. It’s a very clever system where there is no virtual control on printing the US dollar to be used across the world for trade and commerce. The banking system fueled by easy access to the American dollar through the SWIFT system added additional control to the American state department. Since the USA became a net consumer with easy finance available to its citizens, the rest of the world became a net seller to this great American nation. The outsourcing industry created by American firms supported a dollar-enforced global economy system with virtually no opposition.

That’s the brilliance of American Fed Reserve leadership. A system which ensures the predominance of the American dollar through mutual exchange of dollar denominated trade.

The internal arms industry of the USA benefited immensely from this global dollar acceptance. If an American firm wants to sell their weapons to another country, it is easy to use their currency to bill the American state department under the famously infamous FMS (foreign military sales) program. This ensures the loyalty of the purchaser to the demands of the state department through various enforceable agreements. Trillions of dollars of equipment were sold under this program to all the willing purchasers. Sometimes conflicts were created and sometimes induced to ensure that the military industrial complex remains well oiled through its main fuel, the great American dollar. It’s natural for american allies to trust their great friend USA for the dollar trade which helps them run their economies. But when an ally chooses sovereignty for any reason then the agreements which usually are the riot acts come into play to comply with the state department’s demands. The institutions such as the World Bank and IMF along with other rating agencies whose task is to ensure compliance start producing reports that define the credit worthiness of the borrower which in this case is a nation. The international agencies such as the UN which are an extension of the American State department are the first places where draconian sanctions are raised against the non complying states. The dollar dependence now begins to hurt for the borrower. When everything fails, then obviously the US Military backed financial sanctions which will be additionally enforced through New York, London, Ottawa and Canberra.

Most countries of the world maintain the US dollar as their international trade currency. This feeds into the sanctioning power of the American state department.

This story is well known to all past Indian governments who have faced the ignominious sanctions in 1998 after India’s nuclear tests. Before that, these sanctions were also used against India in 1971 during the Bangladesh campaigns. Off late Pakistan has fallen off the ally list of US state department because most of the terror incidents across the world have found Pakistani connection. Also, Pakistan has chosen China as their dependable ally. China enjoys around $350b+ trade surplus with the USA but still it is not in the cross hairs of the US state department because militarily it can’t challenge the US. In military terms it’s the capability that matters not the size. It is a wild assumption that given the Chinese mode of operation everywhere else in the world, they must have also greased some palms in the US. Chinese leadership has begun to use the American model effectively in their foreign policy. Their dollar denominated debt trap is almost a copy of the American system albeit more rigorously micro-managed. Chinese military capability notwithstanding, Chinese boisterous foreign corruption policy has made up for the lack of financial control vis-a-vis the USA. Cuba, Venezuela, Iraq, Turkey, Syria, African states and many other smaller nations which have been economically crippled by US financial sanctions have found a new ally in China. But it has also affected the wealth of those Americans who can no longer trade with such countries. It is the sword that is hanging on every single ally of the USA and it’s citizens except the ‘permanent’ ones. American sanction diplomacy will be copied over by other nations such as China which will hurt Americans more. Sanctions on Russia help Russia more than it punishes them. Sanctions on India helped India become a determined nuclear & financial power.

Sanctions only work in the environment of international cooperation for common good. Sanction on Pakistan & Turkey do strengthen global security.

The ongoing conflict between the USA & NATO and Russia over Ukraine will hurt American interests in more ways than one.

The first one is eroding the credibility and reliability of the American State as a dependable trade partner because of the excessive baggage it brings to the table.

The second one is the importance of nuclear weapons for states to evade crippling financial sanctions by Americans and also to protect their sovereignty.

The third, the helplessness of international countries to negotiate with the US on equal terms.

The fourth, increase of costs across the board within the USA which will hurt all Americans.

The third, will force all international trade partners of the USA to unite and force a more equitable relationship with the USA given the tight control of the American financial ecosystem on the sovereignty of international countries. That SWIFT must be in the control of the UN rather than USA is a genuine ask. SWIFT is a Belgian financial telecommunications standard mostly controlled by American agencies.

Most Asian economies that are still financially dependent on the West but do not choose to fight the European wars have no option but to choose a new financial system that ensures their steady growth for the benefit of their citizens. If that happens then there will be a lasting global peace for everyone free from all types of coercion.

Aditya Satsangi is the acclaimed author of Gold, Glory & God and many other books on Amazon..