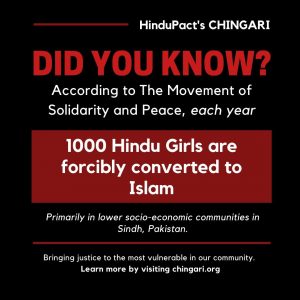 The demographic change in population of Hindus in Pakistan has dwindled drastically from 12.9%  in 1947 to 2.14% in 2017. The concentration of Hindu population is based in four districts (Umerkot, Tharparkar, Mirpukhas, Tando Allahyar) in the Sindh province of Pakistan. Sindh previously known as Sindhudesh was Hindu country until the rule of Raja Dahir in 711 AD. The province was occupied by the British Empire and on partition in 1947 the land was merged with Pakistan. The successive Pakistan regime has started systematic discrimination and were exploited by the Punjabi dominated Pakistani Army. In Spite of generating 63% of revenue the Central leadership has imposed Urdu over the Sindhi speaking population of the province.

The cultural genocide and extermination of religious minorities belonging to Hindu, Sikhs, Jains, Buddhists & Christian community, continues with the rape, abduction, and forced conversion of minor girls.  According to report from US Commission on International Religious Freedom (USCIRF) around 1000 women each year are abducted, sexually abused and converted to Islam each year. The institutionalized forced conversion of religious minorities is carried out by the Dargah Bharchundi Sharif seminary where Mian Abdul Haq, also known as Mian Mithoo is the kingpin of the conversion racket with the backing of Pakistan Judiciary.

To raise the awareness against the atrocities on Pakistan religious minorities the “CHINGARI” Project (Coalition of Hindu Girls Abducted and their Rights) was started on September 18th 2021,when leaders and community residents gathered in more than a dozen major cities around the world to stand in solidarity with the young Pakistani Hindu, Sikhs & religious minorities girls and their families many between the ages of 12 and 17 – who are abducted, married to much older men and finally forbidden to ever return to their families. The social justice campaign aimed towards bringing awareness to Hindus across the globe through information advocacy, community outreach and research. The CHINGARI team is working towards making the local US representatives aware of the unstable religious situation in Pakistan and encouraging them to take further action to convey their disapproval.

The CHINGARI Project led by Hindu Policy Research and Advocacy Collective (HinduPACT) have pledged to highlight the plight of the innocent girls who face this worst form of oppression and to highlight the seven decades of unabated stripping of livelihoods, property and basic rights simply because of the religion. The Pakistani government has allowed China through CPEC (China Pakistan Economic Corridor) to exploit the natural resources and farmlands of Sindh. The region has been selected for industrialization to alter the demographic status turning Sindhis into Chinese slaves. The call for independent “Sindhudesh” is gaining momentum across the province with the Punjabi dominated Pakistani army cracking on Sindhi nationalist leaders, activists, and students being disappeared, jailed, or tortured. The colony type treatment of Sindh province might lead to a situation similar to what happened with East Pakistan (Bangladesh) in 1971.