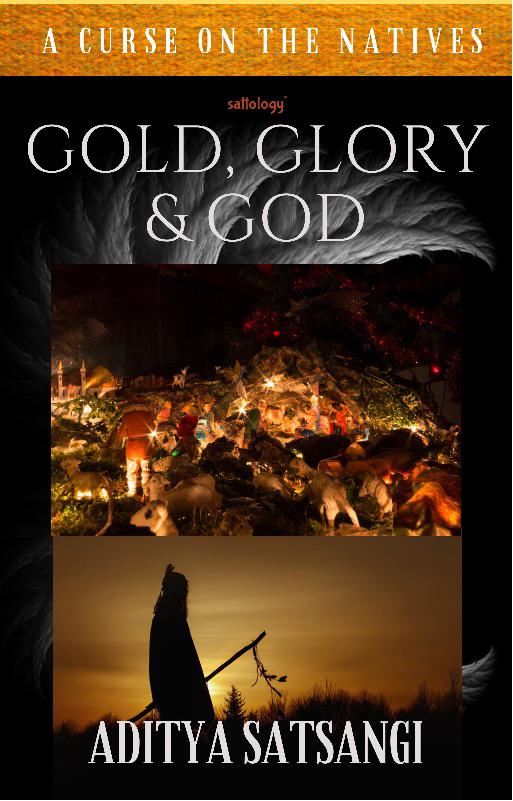 Gold, Glory & God: A Curse On The Natives 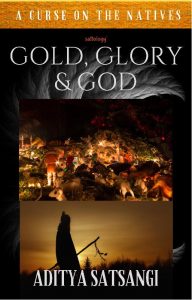 Gold, Glory & God: A Curse On The Natives

Have you ever wondered who a native is? There are numerous accounts of native peoples’ existence. Proof of their existence can be found in various museums across the globe. How do native people and their culture become a part of museums? Why aren’t they living their lives like other people? There is a difference between a war for resources and an invasion to destroy the culture and loot its resources.

The 300 pages book ‘Gold, Glory & God: A Curse On The Natives’ is a non-fiction work. The author of this book, Aditya Satsangi, has attempted to compile a well-researched chronicle of native peoples’ recorded history around the world. This book of an Indian American writer talks about the plight of all natives of the world. This book will lead its readers to a journey of self-introspection and will also help them to remove their self-denial caused due to ignorance.

According to Author, Native is the person who was never converted while non-native is a person who is converted in mindset. The future of world politics will be decided on this basis.

This book of Aditya Satsangi also introduces new concepts such as Critical Faith Theory (CFT) which was the root cause behind colonization and Critical Race Theory (CRT). According to this book, Critical Faith Theory is different from Critical Race Theory in that Race is an anthropological construct, while Faith is an Abrahamic supremacist construct. This book will give high-intensity jolts to the readers. Heres’ an example, “Sixth century was the turning point in the medieval history of the world. It was in the sixth century that saw the birth of the largest faith-based movements that changed the course of the history of humanity. If you think it has ended, then you must be living in denial. The movement led to pogroms the scale of which you have never ever heard or read about in the classrooms of today. The pogrom still continues but has taken fanciful terms such as liberalism & progressivism. The Renaissance for some was the pogrom for others. The intellectualism was for the elites while the poor and destitute hoped for a miracle to meet their most common needs.”

This book is divided into eight segments. These segments are a detailed account of the untold history of natives of the globe (Europe, Africa, North and South America, and natives of Asia and Pacific).

What was the world like in the sixth century that we need to know about? The first chapter of this book contains the answer to this query. What is the story underlying the Church’s emergence? How was Bishop’s ‘Casta’ determined? Gentiles, who were they? This book posed numerous mind-boggling questions to the world, particularly to the Abrahamic community, who perceive natives as backward or uncivilized. The author poses the following question: “Most of the natives constructed huge temples and complexes that have surprised modern archaeologists to this day.” How could they create such massive structures if they were backward or uncivilized?

This book will make readers wonder why the so-called champion of democracy (USA) granted citizenship to natives in 1924? What happened to the natives? What else happened in the sixth century that annihilated native culture and laid the groundwork for untold human rights atrocities over the next 1400 years?

According to this book, many disparaging euphemistic words such as Animism, Pantheism, Polytheism, Nature Worship, Ancestor Worship, and belief in Afterlife were attached to native cultures to make them seem inferior to the colonizing dogmas of Christianism which in itself was a political tool to enslave natives in the garb of make-believe faith. Also, Catholicism was the political arm of Christianity which actually destroyed the native cultures of the world. Most European, Asian, African, and South American ancient cultures and faiths have faced persecution from Christianism & Islam.

After reading this book when people understand the truth about the horrors and atrocities committed against natives, they will be moved to tears.

This book highlights how Ancient Greeks were closely associated with the ancient Hindu traditions. The Romans conquered Greek areas in Eastern Europe. As a result, Romans found Hinduness to be a natural source of inspiration. This book destroyed the ‘Sainthood’ propaganda of Christianism by saying that sainthood is given to an individual based on the number of conversions that are led by him to become subordinate to the Papal kingdom. And for cross, it says,” The cross was used as an emotional symbol of conquest over natives of all lands. It is not a symbol of belief, rather a symbol of colonial conquest. Romani people living in Europe and America are also considered Hindu ethnic groups in this book.

The author exposes the ‘Syncretism’ strategy to undermine the native culture used by the Church and Islam in this book.

The book posed an interesting question. Why do they want to convert someone from a better Hindu (Native) faith to an exploitative Christian or Islamic faith through syncretism? This book also slaps Europe, which is known for championing human rights, for remaining mute on the human rights of European indigenous who have not converted to Christianity. The author inquired, “In today’s Russian-controlled Siberia, hardly 10% of Siberian natives remain. Why is it that Russia’s role in the persecution of their locals by the Eastern Orthodox Church is rarely acknowledged in international forums?”

In the case of Africa, this book reveals how missions have wreaked devastation on the native populace.

Many European and American researchers considered Africans as subhuman species and performed research on the anatomy of their bodies. They captured natives for scientific experiments while sometimes even exhuming their graves to perform experiments on exhumed skulls. Most of this research was a fraudulent one to generate research funds for academic & medical researchers.

This book not only raises concerns but also suggests immediate actions that need to be taken to preserve the identity of natives of Europe, Africa, and other places.

The concept of ‘Democracy’ was questioned by the author. According to the book, democracy was employed as a new colonization instrument to grab territory from the native people. Only Natives who backed the European settlers were allowed to work in the government as subordinates. By claiming that most Native Americans were not part of the new nation, the United States, the author exposed the United States and its democracy.

The propaganda against natives is extremely damaging, and they are treated as if they were animals or plants.

To the European settlers, their rights were meaningless. The Church also perpetuated the myth that the Natives lacked souls. Based on data from native and American accounts, the author thinks that approximately 35 million natives were killed in the continental United States between 1492 and 1924 and that the number of natives slaughtered in Canada between 1475 and the late 1900s should range between 15-20 million. A person from the past in this book, Columbus loses his prestige. According to the book, if you look at his search through the lens of today’s human rights, he was nothing more than a terrorist to indigenous Tainos.

The District of Columbia, Colombia, and a slew of other well-known organizations bear his name. Why was it necessary to celebrate a terrorist? Why is the United States’ capital still named after such a zealot? These are questions that we rarely consider. This book, on the other hand, will make you think.

According to the book what happened and is happening to the natives was/is the competition for ‘Gold, Glory & God’ between European rivals. This book asserted that the account of St Thomas’ arrival in India in the fifth century is a myth. Local Indian historians have abundant proof that a person named St Thomas did not come to India till the Portuguese reached India in the 15th century. To convert local Hindus, the Portuguese stole a local temple and erected a burial of a European-origin guy. Christian missionaries as usual made fake stories of the martyrdom of St Thomas to demean Hindus especially Brahmins, who were much more learned than most European and Islamic scholars.

In this book, the author tried to debunk most Muslim scholars and their claims that they ruled India for 1000 years. For author, Akbar or Jalaluddin Muhammed was one of the biggest Mughal tyrants who could not conquer Rajasthan despite having alliances with powerful Rajput Kings such as Raja Man Singh.

This book hit very hard on the pro-Islamic Indian or world historians by quoting, “One of such prized fake acquisitions was the Taj Mahal which was a Hindu shrine and it was desecrated by putting a fake grave inside the temple. Qutub Minar in Delhi was built from the stones of broken Hindu & Jain temples to humiliate Hindus. I would rather call the Taj Mahal a symbol of Lust…..Therefore, by the time Aurangzeb (another terrorist) came, his majority of armies were Hindu fighters who were easily lured by Marathas to create ‘Hindavi Swarajya’ meaning ‘Self-rule of Hindus’.”

The author of this book argued that a new form of democracy is required. He refers to it as ‘Loktantra,’ which refers to a system designed to benefit all living residents, including animals and plants, in the area where it is applied. Loktantra is not democracy, and Loktantra is not democracy. The author has proposed a 10-point Loktantra constitution to promote true peace and tranquillity throughout the world. In addition, the author has proposed solutions to eliminate faith-based supremacy and colonization attempts by Faith Supremacists over the world.

This book is highly recommended and a must-read if you want to learn how cheap and ruthless Faith-based colonizers were in their attempts to eradicate the natives from the earth and to learn their real history. This book is available at the following link

The author is a Himachal Based Educator, columnist, and social activist. Twitter @Mahender_Chem Email mahenderchem44@gmail.com