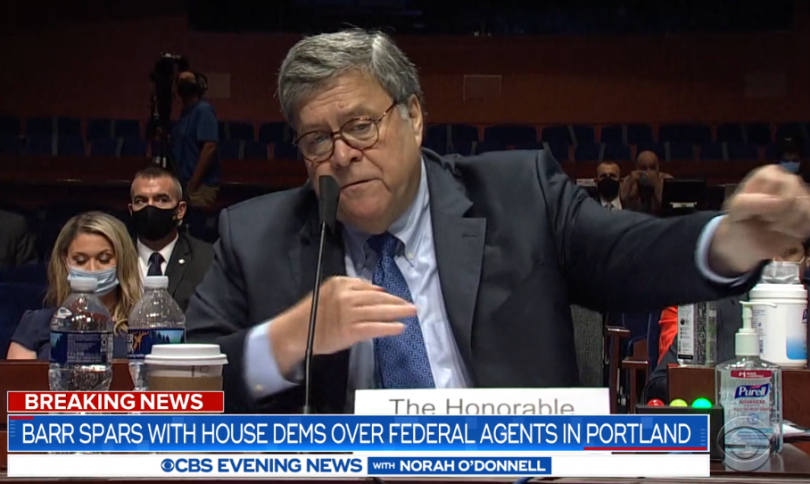 William Barr, Attorney General of the US had to testify before congressional house Judiciary committee on July 28th 2020.  Mr Barr went through a complete day hearing with the committee headed by Democrat Rep James Nedler and Democrat controlled committee. For a person who is watching the entire hearing, it seems that the entire episode Mr Barr testified was a one sided shady hearing as it was all accusations rather than listening return explanation. 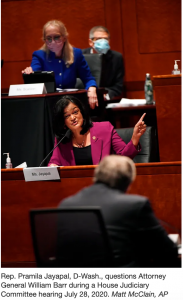 Rep Jaypal who is also a member in the committee dodged Mr Barr with accusations rather than questions. She was not allowing Mr Barr to respond rather on the contrary she raised her voice not to test her patience. Her arrogance was wide and clear. She thinks being a representative is a privilege to question anyone and even a sovereign republic Minister. Few months ago, she was disdainful towards Indian Foreign Minister Jaishankar calling him “ Sign of Weakness” after he refused to meet her as she was not part of the House committee for Foreign affairs.

Democrat Lawmakers accused Mr Barr with allegations on the recent violent protests that triggered after the death of George Floyd. The lawmakers accuse him of boosting the Trump Election Campaign by deploying Federal Agents. Rejecting those allegations, Mr Barr said Federal Agents were the victims of the violent protests and cited that the three federal agents permanently lost  their eyesight due to the violence. Democrat Lawmakers while testifying repeatedly undermined  Mr. Barr with various accusations and repeatedly berated Barr’s response that they are not interested in hearing the explanation. Every Democrat Lawmaker repeatedly cut off Barr’s responses by accusing him favoring Trump for the deployment of Federal agents. Mr Barr at one point of time, asked for a 5 min break which the Chair denied to even give a 5 min break and responded chair “ You’re a real class act, [Mr. Chairman]”. While the attacks were pre-determined with an aim of focussed target on the Attorney General Barr. Even the Left liberal media CNN had described the whole episode of one sided hearing calling “Democrats were out for blood.” He was not allowed for extra five minutes to answer the questions for each lawmaker which he was normally supposed to get. However, Republican Lawmakers had to sacrifice their time to allow Mr Barr to respond to the accusations of Democrat LawMakers. 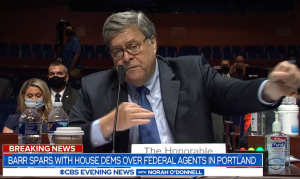 Mr Barr did a push back calling out Democratic Party for widely failing to condemn violent extremists attacking a federal courthouse in Portland amid a series of riots that have lasted over 60 consecutive days. Committee Chairman Jerry Nadler (D-NY) even claimed at the start of the week that the violence in Portland was “a myth.” He pointed out that “We are on the defense. We’re not out looking for trouble,” adding that he supports peaceful protests but condemns those who commit crime.

He also pointed out  “What makes me concerned for the country is, this is the first time in my memory that the leaders of one of our great two political parties, the Democratic Party, are not coming out and condemning mob violence and the attack on federal courts,” Barr said. “Why can’t we just say: ‘Violence against federal courts has to stop?’ Could we hear something like that?”

Regarding Black crimes, he cited that “The threat to Black lives posed by crime on the streets is massively greater than any threat posed by police misconduct,” Barr said. “The leading cause of death for young Black males is homicide. Every year approximately 7,500 Black Americans are victims of homicide, and the vast majority of them – around 90% – are killed by other Blacks, mainly by gunfire. Each of those lives matter.” Barr also disagreed that there’s systemic racism in police departments, called it “irresponsible” to call federal officers “storm troopers” and said it’s “extremely dangerous” to defund the police. Calling riots in Portland, Oregon, “an assault on the government of the United States,” countering Democratic lawmakers who characterized federal officers’ actions against protesters as unconstitutional, politically charged fear mongering.