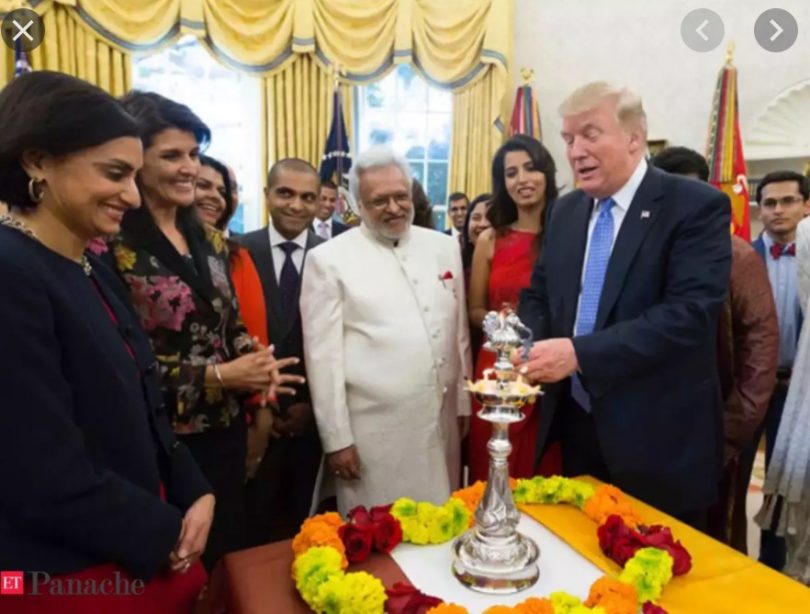 Indian Americans generally vote with Democrats and identify with other immigrant groups, but the stirrings of Hindu nationalist awakening may be shifting that alignment.

Indian Americans, about 80% of whom are Hindus, are the second-largest immigrant group in the U.S. after Mexicans. In 2016, fewer than 20% of Indian Americans supported Donald Trump, but Republicans think they can get a bigger share this year. One reason – Indian Prime Minister Narendra Modi is a big Trump fan and vice-versa.

Indians still remember his speech in India where he said “I can tell you, you have never had a better friend as president than President Donald Trump. That I can tell you.”

Trump has made no criticism of Modi’s drive to give Hindus a favored place in India, for example, by promoting a citizenship law that treats Pakistani Hindu and Muslim refugees differently. Democrats and some progressive Indian Americans have criticized Modi over that campaign, but more conservative American Hindus endorse it.

Below are highly emotional topics for Hindu Americans and that drives Hindus towards the Republican Party.

Why HINDUS should support Trump?

Because he supported India when it needed most. Indian Americans, about 80% of whom are Hindus, are the second-largest immigrant group in the U.S. after Mexicans. In 2016, fewer than 20% of Indian Americans supported Donald Trump, but in 2020 it has the potential to go up to 60% of the vote share! One reason – Indian Prime Minister Narendra Modi is a big Trump fan. Indian’s have not forgotten what President said in Jan “I can tell you, you have never had a better friend as President than President Donald Trump. That I can tell you.”

Indian-Americans have not forgotten Mr. Joe Biden’s infamous mocking of the community when he said he finds Indians only running the 7-11 convenience stores, and with those thick Indian accent. The reality was totally different than his typical stereotype characterization based on the famous Simpsons TV serial character of Raghu the convenience store guy. Indians are the most educated and richest immigrants America has, their average gross yearly income is $105K; $40K above the country’s national average! And from being the best doctors to technology brains to being the CEOs of Google, Microsoft, IBM, plus many more Institutions of this country.

Their children for the last 15 years are beating every competitor and getting selected for the prestigious Spelling Bee, breaking all the ACT/SAT/GRE/MCAT/GMAT, etc. type national filtering parameters. The army is the next destination where our 2nd and 3rd generation with sharp brains are soon going to get in…

So it is important to have more assimilation and understanding, which can come from Trump’s acknowledgment and endorsement; and this is going on. Democrats, have wasted the huge support they enjoyed from the community for so long, only to hurt them by falling into Islamic countries agenda against India’s sovereign policies be it Triple Talaq, CAA, 370, 35A, NRC, Ram Mandir, Delhi rites, Cow protection-related actions or controlling the Urban Naxals. Democrats have taken a consistently anti-India stand to hurt so many of us emotionally, our emotional and parental connection with India cant be broken, and its high time Democrats get this!

What do we want?

COVID-19 as an Excuse to Destroy the U.S. Economy:

President legacy in his first term along with many things was an all-time great economy before the bio-weapon was fired on the entire World in general and America in particular. We need Trump administration to be very aggressive and get the economy on the track, even if that requires various ways of dharma diplomacy.

They are exporting capital and their cheap merchandise to dupe and bankrupt the World.

Today China has a border dispute with over 12 countries and wants to conquer them financially and militarily.  President has to take the TV rhetoric on to the South China sea, and nothing better than the war-based economy, after all the Wuhan virus was fired accidentally or intentionally on the richest economic power with the same purpose, as evident by the current action of the country where this virus came from. America needs a strong leader, and who better than Donald Trump.

The Globalist-controlled Western Media loves to use Russia as a boogeyman, but Russia is a potential ally and not an ideological rival. The Communist Soviet Union died at the end of 1991.  The Cold War has ended.  Russia today is a conservative, Christian, and capitalist society, though not fully a democracy (India as an ally can help transform Russia into a democracy but for that America has to give some waiver and support). The United States must work with India, Israel, Japan, Europe, Saudi, and Russia in the interest of global peace.

– Sharad Mohan is a proud Hindu-American