Since the start of Russia’s “Special Operations” on Ukraine, Political Arena around the world is smattering about the possibility of American sanctions in the form of Counter America’s Adversaries Through Sanctions Act (CAATSA) on India.

It’s not the first time that such possibilities have loomed up. In the past, CAATSA on India was a hot discussion topic when India decided to purchase the S-400 Surface-to-Air Missiles (SAM) Triumph from the Military Might “Russian Federation”.

Several defense analysts not only in New Delhi and Washington D.C. but also in Beijing, Ankara, and Islamabad are commenting about the potential rupture of the India-Russia S-400 deal in lieu of CAATSA.

In 2018, long TV debates were held about the impact of India-US relations after the S-400 deal.

Beijing, Ankara, and Islamabad were rapturously confident that it will strain the US–India relations once the sanctions are imposed on India by the United States (US).

However, in midst of all smidgens “7, Lok Kalyan Marg” was quite confident that’s its profound foreign policies will force the “White House” to think millions of times before imposing CAATSA sanctions on this Asia’s Power.

The ‘Countering America’s Adversaries Through Sanctions Act (CAATSA)’ is a piece of US legislation that imposes sanctions on American adversaries — the states of Iran, North Korea, and Russia. The CAATSA Bill was passed in 2017.

The sanctions targeted Russia in particular for the Crimean annexation and its alleged role in the 2016 US presidential election. The provisions related to sanctions on Russia covered activities like

(9) Privatization Of State-Owned Assets by Government Officials, And

The sanctions are intended to economically hurt Russia over its international actions. As part of the sanctions, the US would also economically punish any country which would try to engage in transactions with the Russian state over military purchases. 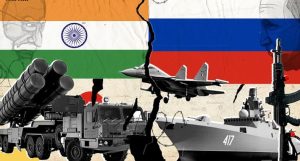 India has long relied on Russian military logistics after being spurned by many other western nations. India’s regional rival Pakistan was supplied the same by the US (which is ironic considering China is now Pakistan’s primary supplier while India has grown closer to the US).

It was against the backdrop of this geopolitical situation that the erstwhile USSR and India enjoyed a long, stable, and fruitful international relationship.

To date, every Indian is highly grateful for the way the USSR went out of its way during the Indo-Pak War of 1971.

When India was under great threat on both Eastern and Western borders, one call from New Delhi to Moscow had made US President Richard Nixon and his Secretary of State Kissingen and British Prime Minister Edward Heath wet their pants.

On one hand, Soviet President Nikolai Podgorny’s prompt decisions stopped the Chinese from acting on the India-China border that facilitated India to thin troops there to be used against Pakistan. In place of the usual deployment of 3-4 divisions, the Soviets deployed 44 motorized divisions on the Sino-Soviet border, creating a land threat to China.

And on other hand, the Soviet navy confronted when the Americans and British sent their navies into the Bay of Bengal, task force 74 and task force Eagle respectively.

Under Admiral V Kruglyakov, the Soviet navy deliberately let its nuclear submarines surface, to be picked up by American satellites, to threaten the American surface fleet.

The Soviets also organized a flotilla of cruisers and destroyers under task force 40 to help Admiral Kruglyakov’s much smaller force[1].

Faced with these twin threats, the US and British task forces ran away like a skiddy rabbit from the Bay of Bengal and could not interfere with Indian land operations in erstwhile East Pakistan which finally led to the creation of Bangladesh.

India and Russia not only are partners in defense but in many other fields like Energy, Space Cooperation, Economic, Political, Science and Technology, Transport (North-South Transport Corridor), and on top Cultural relations [2] since the 1700s.

Moreover, Russia has always stood with and for India when the whole world has desolated India. It was Russia who had used Veto Power 4 times for India while other UN Permanent members had voted against India[3].

In the immediate aftermath of the Crimean annexation, India was careful not to directly criticize Russia and jeopardize its strategic partnerships.

India is also slowly getting closer to the US, to act as a counterweight to China in the region. Political Pundits cite this as the reason that military purchases from the US had been increasing while those from Russia decreased.

For India, this is a critical issue as the country relies heavily on Russian military exports. Russia contributed 49 percent to India’s total military imports in 2020, according to data from the Stockholm International Peace Research Institute (SIPRI).

However, in 2018, India signed a $5-billion deal with Russia for its advanced missile systems, the “S-400 Triumf Surface-to-Air Missile Defense Systems”, to counter growing Chinese aggression in the Indo-Pacific region. Nonetheless, the deal did attract the risk of facing automatic US sanctions as they were in contravention of CAATSA.

CAATSA Sanctions Looms over India for the First Time

When India struck deals with Russia, there were high risks of CAATS sanctions on India. But India could also escape the sanctions by receiving a waiver, which was included in the Act, keeping the world’s largest democracy in mind.

The key factor to receiving the waiver was that India diversifies its arms procurement as going cold turkey overnight could seriously jeopardize India’s strategic position. India had also possibly attracted sanctions from the same Act by purchasing Iranian crude.

The decision on the grant of the waiver was essentially over a tacit understanding that the S-400 purchases were water under the bridge, but future acquisitions would be monitored more closely.

“Washington has been somewhat understanding because India over the last few years has diversified its defense procurement and reduced its dependency on Russia to some extent, which is one of the conditions for gaining a CAATSA waiver,” Rajeswari Pillai Rajagopalan, head of the nuclear and space policy initiative at the Observer Research Foundation, told CNBC in 2018[5].

“CAATSA puts India in a tight spot because the country has traditionally purchased Russian defense systems. CAATSA asks India to stop on a dime, reverse its spending decisions, and cut out a long-time supplier,” Mukesh Aghi, President and Chief Executive Officer of the US-India Strategic Partnership Forum, had said.

Aghi had claimed that a waiver for India is in the United States’ “Best Interest.” 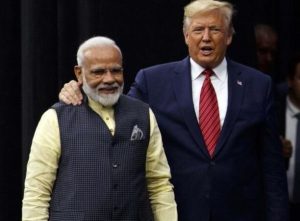 Trump Administration Waiver to India in 2018

India was becoming a key strategic partner for the US, and it had to walk a tightrope of deterring other countries from purchasing Russian arms while also making sure that India wasn’t pushed towards the Russians.

“The ability to give waivers was widened by Congress, specifically with India in mind,” Richard Rossow said: “The Trump administration made a pitch on a number of occasions to (Capitol) Hill, trying to make sure there was a little bit more space to offer waivers to countries and India was often named in that.”

“US Secretary of Defense James Mattis is making a simple calculation that keeping India close is more important than punishing India for continuing to make defense purchases from Russia. His comment asks Congress to view India as a check against China, which poses the greatest national security threat to the United States a sentiment shared by Republicans and Democrats alike[6],” he said.

Biden Policies has failed both domestically and abroad. Questions are being raised on Biden’s foreign policy after a series of failures which include but are not limited to Afghanistan Debacle and Check on Terrorism, NORD Stream2 failure, Saudi and UAE Fiasco, Russia-Ukraine tensions, Iran wreckage, and the list is endless.

On the domestic front, the Biden Administration’s work is far beyond satisfaction. The number of deaths due to Covid had already surpassed the death numbers during Trump Administration although America’s Pharmacy shelves are not only filled with Vaccine doses and its booster too.

Illegal Immigration Chaos on the southern border, a 200% increase in gas prices, and the skyrocketing inflation, which is highest in the last 4 decades have only acted as a catalyst to lower Biden approval rating to sea-bottom.

Under such blemished circumstances, Biden will not burn the bridges with its strategic Partner India which shares the table in both the Pacific and Middle East Quad.

It seems that as of now, India will get away with a waiver, however, there are more fundamental problems besetting India whether New Delhi sources capabilities to counter China and Pakistan from Russia or the US.

[4] What weapons has Russia sent to India? (defensenews.com)

[6] Explained: What Is Caatsa And How Us Can Impose Sanctions On India Under The Act? (cnbctv18.com)