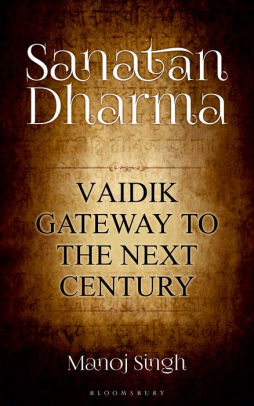 Book: Sanatan Dharma: Vaidik Gateway to the Next Century

For a long time, books on Sanatan Dharma or Hindutva have been written. This sort of writing has become a little faster in recent years. Another unusual aspect of this is that more such books are being written in English. Many foreign authors have also written books about Hindutva. 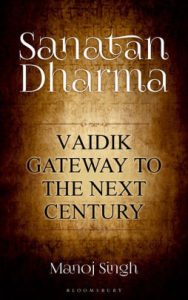 Sanatan Dharma: Vaidik Gateway to the Next Century

If the purpose of writing in English is to be understood from an Indian perspective, the response to this question is sufficient: who are the people who read these English-language books? The answer can be found among the society’s educated middle and upper classes. People from such affluent backgrounds are now regarded as role models. Writing books about Hindutva in foreign languages or by foreigners is not a problem.

But a dilemma arises: how accurately would the language and her followers comprehend or explain Sanatan Dharm or Hindutva if they don’t have a word for OM if they don’t have adequate words for ‘Dharm,’ ‘Guru,’ and ‘Aatma,’ ‘Devta’ etc (there are many words like these).

The unfavorable consequences of the language, on the basis of which a conspiracy known as Mythology with the goal of rendering Indian history a myth has begun to emerge today. It has become fashionable to cast doubt on India’s glorious culture and science-based traditions. Making fun of or making jokes about our science-based techniques of worship, rituals, fasting, festivals, and so on is also fashionable these days, but the fact is quite different. Our customs, festivals, and fasts, etc. all have a scientific foundation as well as social, economic, and environmental significance.

A well-known author Shri Manoj Singh has authored a book entitled “Sanatan Dharma: Vaidik Gateway to the Next Century” for those who question Sanatan Dharma or Hindutva and its numerous elements, as well as for those who should be accountable for providing appropriate responses to them.

Here is an attempt at a promotional review of author Manoj Singh’s excellent book because the anti-Hindutva gang is always promoting its own content and authors. Why don’t we, The Sanatanis, follow suit? Manoj Singh is the author of the very famous Hindi book, “Mai AaryaPutra Hun.” The book “Sanatan Dharma: Vaidik Gateway to the Next Century” is 312 pages long and written in English. This book, published by Bloomsbury India, is a treasure trove of Sanatan-based knowledge. Natural science is deeply ingrained in Sanatani cultural traditions. For the readers of this book, that treasure chest of information will be unlocked.

Waste Culture of Science, Vaidik Aarya and Sanatan Culture, Nature in Sanatan Culture, Sanatan Jeevan Darshan, and Challenges of the Modern Human World are the five parts of this book. There are numerous extensive sub-chapters on various Sanatani concepts in each Part.

The book appears to be the outcome of a great deal of devotion to Vedic research. In the first chapter, the author debunks Stephen Hawking, the great scientist, by asking simple questions.

Could Hawking not have phrased it to say that science and market have rendered the earth uninhabitable?…. However, the scientist (Stephen Hawking), while talking of shifting our civilization to other planets, hasn’t clarified whether he is referring to just humans or all of nature. If he means nature, that certainly can’t be shifted. So, Of course, he means just humans. What kind of selfish and narrow mentality is this? This is the key difference between the modern civilization of science and the eternal (Sanatan) Vaidik cultural civilization. Sanatan Jeevan Darshan cares about all life forms and talks about Brahm to Brahmand (Creator to Creation). By the way, Mr. Scientist, do you not know that the existence of humans is not possible all by itself?

The author made a valiant effort in this book to demonstrate why Sanatan Dharma adherents have always adored nature, and that everything that is celebrated as festivals or performed as rituals is based on some natural scientific event. Readers will learn the true meaning and reason of every celebration, ritual, and fasting after reading this book.

People have always raised many doubtful questions against everything Sanatan Dharam followers do in the name of festivals or rituals in today’s fast-paced world. They sometimes make fun of these things because they don’t know the answer. Manoj Singh’s book will answer all of your questions.

It’s an excellent book for parents who want to familiarise themselves and their children with Sanatan Dharma and its various concepts, such as natural science. This is a must-read book for anyone interested in learning about the significance of Amavasya, Poornima, and Fasting on Poornima, the concept of Eclipse, Kuan Pujan, tree worshipping (Peepal, Neem, Vat Vriksha, Banana, Tulsi, and so on), and Cow worship.

Why do we celebrate many festivals throughout the year? What is Pitri Paksha (Shraddha) and why is it important? Why do people do narmada parikrama? What is the reason behind Kumbh Mela? Readers will get rare knowledge about Sociology and economics in Sanatani Festivals.

This book discusses Sanatani Jeevan Darshan in-depth, including Vedas, Ahimsa, Dharma, Shanti, and other topics. The challenges of the modern human world are also highlighted in this book. In one small article, I can not explain the beauty of this great book.

The half-line “Vaidik Gateway to the Next Century” in the title of this book has a significant meaning in itself. The response to the question, “How does Sanatan Dharma or Hindutva hold the solution to all the problems of the world?” is also detailed in this book.

In simple words, I only can say (recommend),” Please read this book and discuss its content in Home and other places too. This book will help to join the Sanatani Roots. Thanks a lot, Manoj Singh Ji for this wonderful gift to the world. This book is available at the following link: