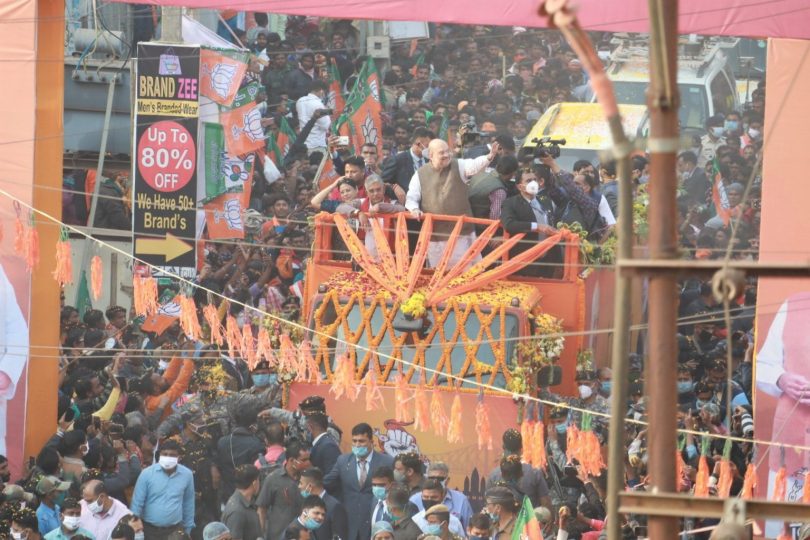 West Bengal, the land of Swami Vivekananda who enlightened the world with the Indian ethos /culture/ philosophies of Vedanta/Yoga bringing Hinduism to the status of a major world religion during the late 19th century and devoted his life to National Resurgance

the land of mystic saint Sri Ramakrishna Paramahamsa whose chief disciple Swami Vivekananda formed the Ramakrishna Math, the land of Nobel Laureate Rabindranath Tagore, the land of Bankimchandra Chattopadhyay who was key figure in literary renaissance of Bengal when he personified India as mother goddess with composing Vande Mataram, which lead to inspiring revolutionaries & freedom fighters in the Indian Independence Movement,

the land of Netaji Subash Chandra Bose who formed the first Provisional Government of Free India in Exile and Indian National Army is sensing revival of nationalistic passion and remnisicing of the cultrual, social, intellectual pride among the masses used to have five decades back.

The state of West Bengal under the totalitarian leftist regime of 34 years destroyed the centre of Industrial hub, subverted democracy by tampering with the electoral process, decimating the opposition, indoctorination at academic institutions which were filled by leftist sympathizers who polluted the minds of the young generation with the toxic Communist philosophy, lynching of opposition leaders, cadres in the state.

The unfinished task of state going downhall accelrated in the whimsical incumbent regime of Mamta Banerjee who has a uncontrolled,undisciplined, factional ridden TMC cadre who are petty criminals and run organized crime network in the state and untouched by law enforcement agencies. The party lacks command structure and this had resulted in widespread corruption in the state by TMC party leaders. The goons and petty criminals from the left switched over to TMC. That’s why people of Bengal say only party’s flag has been changed but the atrocities & criminalities remained the same. Even worst to left government is atrocities on women, rape,killings etc have been increased a lot but instead of protecting women TMC Chief & CM West Bengal taking the sides of those criminals to remain in power. The crumbling civic infrastructure of the state came into limelight when Majerhat bridge & Vivekananda Flyover in Kolkatta collapsed and exposed the shortcoming of state apathy & neglect towards bridges.

TMC supporters vandalized the statue of the great Legendary educationist Shri Ishwar Chandra Vidyasagar ji, which shows how much insensitive TMC leadership is towards education. Even they failed to give due & legitimate demands of lakhs & lakhs of Primary Teachers in Bengal. The state administration could not provide security to doctors and the health care professionals were routinely assaulted which sparked seven day strike in the state paralyzing the essential medical services. And due to this lawlessness has spread and party cadres of ruling party have resorted to extortion of general public and business enterprises. The Sharda Chit Fund scam exposed the involvement of ruling party men in which Rs.2500 crores were collected from 1.7 million investors and Mamta Banerjee prevented the arrest of main accused Rajeev Kumar by CBI and sat on three day sit in protest. The state administration has been opposing Central Govt Schemes implementation in the state and the latest being the PM-Kisan scheme which provides the farmers with a cash transfer of Rs 6,000 a year. The state government also refused to implement Ayushman Bharat scheme scheme which provides an annual health cover of Rs 5 lakh per family to more than 10.74 crore poor families — about 50 crore people.

And to remain in power Mamta Banerjee for the sake of vote bank politics started appeasing 30% Muslim population of the state by doling out schemes structured to benefit the community at the cost of Hindus. The state government favoured the minority community by allowing Muharram processions without any riders and the state government interfered in the rituals of Dashmi & Puja by imposing timelines for the immersion of dieties. The state government under Didi also provided monthly stiphend for Imams from the state exchequer. And the Begum of Bengal also donned hijab and attended the functions, rallies organized by Muslim community to keep her support base intact.

And we have seen that in recent years the members of minority community have escalated attacks on attacks on Durga Puja mandaps at many places and on immersion processions. The state government had practised discrimination against majority community since the left rule in the state. The Marxist government has allowed lakhs of Bangladeshi Muslims to settle down in the state and gave them ration cards and voter identity cards in return for their support in elections. These settlements altered the demographic balance in many parts of the state with the Muslims torturing Hindus and driving out of the areas where they became majority.

The anger of the majority is simmering with the state government blatantly practicing minority appeasement. The state is turning into Islamic Caliphate with the vote-bank politics has invited global jihadi groups and the affiliates of Al-Qaeda and Islamic State into West Bengal. The state border has become hub for the global jihadist who are working in close coordination with ISI for creating unrest in the border areas. The blasts in Burdwan serves as wake up call . The state coffers are empty due to the populist measures of the government. The exodus of Industries from the state since Jyoti Basu regime in 1977 and the Singur agitation by Mamta Banerjee against the Tata new automobile plant have made the state the symbol of rabid lawlessness in the country.

The overt and covert minority appeasement has led to sharp consolidation of Hindu votes in Bengal and the signs were visible in 2016 assembly elections and the Saffron party stunned the ruling party in 2019 LokSabha elections bagging 18 seats reducing the ruling party figure to 22 from 34. And the party is gaining ground and traction with discontentment against ruling party rising. Home Minister Amit Shah has chalked out exhaustive plans for winning 200 seats in the state with mega rallies planned by the national party, Durga Puja outreach, setting up of ‘Krishak Suraksha Pad-yatra’ in every rural constituency, agitation and protest to expose the shortcoming of the administration and training women in self defense considering the history of large scale violence in Bengal elections. The centre named the 150-year-old Kolkata Port as Syama Prasad Mookerjee Port to establish a connection with locals in the state. The Prime Minister Narendra Modi also paid tributes to philosopher and sage Sri Aurobindo on his 148th Birth Anniversary on India’s 74th Independence Day. The Vice President Venkaiah Naidu also took to Twitter to pay his respect to the legendary Sage.

Firebrand leader, President of BJYM, Member of Parliament Tejasvi Surya marched along with thousand of supporters and gheraoed the West Bengal secretariat “Nabanna” on October 8th and challenged Didi on her own turf. He stuck chord with the youth electorate of the state who are disenchanted with the state administration due to lack of job opportunities. Home Minister Amit Shah visited the state and stuck the chord with the people by paying tributes to great freedom fighter Khudiram Bose. And from 2021 the former party president will spend atleast seven days in the state till assembly elections to take stock of electoral preparations, preparing strategies to counter TMC violence.

The development slogan of BJP has stuck chord with the electorate and it has rattled TMC leaders and its Chief electoral strategist Prashant Kishor. He had stated that he will quit his job if BJP croses three digit mark. The stakes are high as the the agency IPAC has deployed 1000 volunteers to study 294 seats in the state. Sensing the undercurrent many high profile TMC leaders Suvendu Adhikari along with many party leaders have joined BJP. The ruling party without ideology has now become torch bearer of nepotism and Mamta non corrupt image & slogan of “Maa, Mati, Manush” looks hollow than ever.

The traditional Muslim votebank of TMC is now gearing to embrace the Owaisi’s All India Majlis-e-Ittehadul Muslimeen (AIMIM). And this has unsettled Mamta Banerjee who is fearing to be unseated in the summer of 2021, with the Muslim outfit will cut into her traditional votebank as posters of Owaisi have surfaced in Muslim dominated seats of Bengal. All these indicators suggest that Saffron party is looking to rewrite the history with resurgent nationalistic passions among Bengali’s similar to Revolutionary Nationalist before Independence.

And Hence the time has come to fulfill the dream of Swami Vivekananda & color the whole Bengal with Saffron.