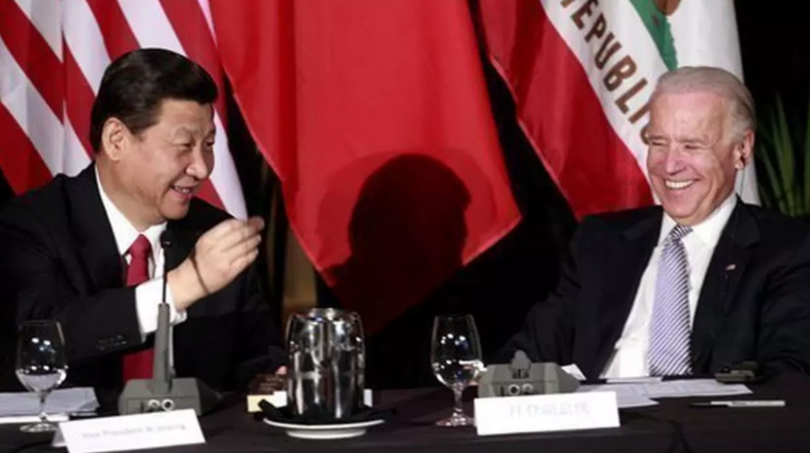 On January 20th 2021 the world media went gaga over swearing in ceremony of Joe Biden as 46th President of United States of America pledging new path for the nation & usher in new era of progress. He promised to promote peace and participate in global efforts to eradicate COVID19. With one week since US President Joe Biden assumed office he has signed executive orders to undo Donald Trump key policies. And in the name to reestablish United States of America as global leader of free world, Biden policies seemingly seems to benefit its number one adversary China.

This is puzzling as the lab engineered Chinese cultivated Wuhan virus is responsible for death of 400,000 Americans and rising with every hour.

Joe Biden will go soft on China in the name to focus on domestic issues to fight pandemic and initiate to carry his socialist policies going forward. Surprisingly the Chinese celebrated the election victory of Biden and they are hoping the trade sanctions would be eased in the Biden regime. In the process of undoing Trump legacy the Biden Administration is compromising national interest of America by allowing Chinese investment in its power systems which are extraordinary threat to the country’s national security, foreign policy and economy. The ban on buying national electric-grid systems, such as power transformers from China, for their low prices is likely to be lifted in coming days leaving the American power grid vulnerable to cyber attacks. And not to mention around 200 Chinese large power transformers have entered the U.S. energy system.

And similarly Chinese international telecommunications supplier and phone manufacturer, Huawei, ZTE were banned by the Trump Administration from supplying network equipments to US companies. And going further India, Japan along with Australia, Israel and United States Known as (QUAD+) are working together in development of next generation 5G and 5G technologies. All this is likely to be put in cold storage in the Biden Administration. And the inter governmental organization European Union have signed the deal with China on Comprehensive Agreement on Investment after sensing weak leadership in The White House. And most likely the cheap Chinese network equipment might help EU to strike reconciliatory approach towards Huawei 5G and allow it in the network infrastructure of the continent.

The United States seems to lose allies rapidly in the Biden Administration. The Chinese have upped the ante and testing the nerves of new Biden administration by attacking Indian post in North Sikkim and large scale incursion of Chinese fighter aircrafts in Taiwaneese air space for second consecutive days. And few days back it authorized coast guard to fire on foreign vessels in contested seas in South China Sea & East China Sea. And China has stepped the ante to control water bodies to displace United States as dominant power in the Indo Pacific region.

And the reason for Biden going soft on China is evident due to CCP threatening to start investigations against Hunter Biden business links in China which is alleged to have violated tax and money laundering laws. The Biden administration has gone on the wrong foot in trying to reverse Trump policy. In its quest to statisfy the growing lust of “Military Industrial Complex” it is contemplating to initiate the nuclear treaty signed with Iran in 2015 and reviewing the peace agreement signed with Taliban with the Trump administration.

The socialist agenda of Biden Administration seems to hurt Americans and America most. Around 10 million Americans are out of work and 11 million are offered a pathway to citizenship, where a pandemic rages and untested migrants welcomed.

Also he has halted the construction 430 miles of border wall with Mexico and stopped deportation of illegal immigrants including criminals residing in the country for next 100 days. The Joe Biden administration have also stopped energy exploration in federal land in New Mexico, which will have catastrophic consequences on the economy of the state.The Keystone 1,700-mile (2,735-kilometer) oil pipeline was revoked by Biden citing carbon emissions in his first day of office. Biden decision to join the Biden Paris climate accord will cost 400,000 American manufacturing jobs to the Chinese.

And after China banned 28 top officials serving Trump Administration, Biden did not bother to retaliate. The Big Oligarchy Tech Tyrants are censuring free speech and imposing restrictions on social media accounts of former President Donald Trump with the aim of limiting his interaction with his supporters through their medium.

The socialist policies of Biden will ruin the country similar to what the Left front rule did in its 34 years rule in West Bengal. The Indian state suffered heavily under the Marxist Communist Party (CPM) with Industry gone downhill to the drains & farm growth suffering due to relentless protest, strikes, lawlessness created by party in power ruling the state.Member of Parliament & Top Constitutional reformist Ashwini Upadhyay has stated there are around 5 crores illegal Bangladeshi immigrants settled in West Bengal, Assam & other parts of India. Biden is enacting the similar template to destroy American supremacy and caving in front of Chinese Communist Politburo. And it seems that Biden along with Nancy Pelosi is working to impeach Donald Trump second time for the attack on Capitol Hill accusing former President of inciting violence and turning deaf ear and blind eye on the trail of destruction done by ANTIFA supporters in the BLM movement last summer which left 700 cops injured.

The Biden Administration is scared of Donald Trump popularity among men in uniform and now officers guarding the President are being vetted by FBI. The Biden administration is working like Left government intimidating the majority and demonizing them as white supremacist and appeasing minorities as he had lifted travel ban from Muslim countries imposed by Trump. The first seven days of Biden administration have been disaster and the weak old President Joe Biden is reported to be suffering from dementia and will bow down to whims and fancies of CCP Politburo effectively making him glorified undeclared slave of China in The White House.